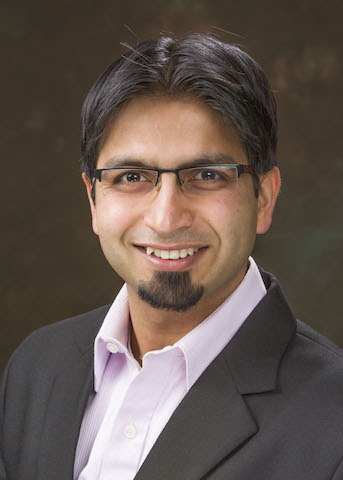 Algorithms, and its connections to optimization, machine learning, and statistics.

I am seeking students with strong cs/math backgrounds interested in algorithms broadly. Please apply directly to the department, and indicate in your application if you're interested in working with me.

Richard Peng (GaTech) and I organized a workshop at FOCS 2018: Laplacian Paradigm 2.0

We present algorithms for solving a large class of flow problems on unit weighted graphs to high accuracy in almost-linear time. Our framework is inspired by the routing based solver for Laplacian linear systems by Spielman and Teng (STOC '04, SIMAX '14), and has a similar overall recursive structure. Our adaptation of it to flow problems requires several new components including adaptive non-linear preconditioning, tree routings that give approximations in two norms simultaneously, and gradient-preserving sparsification for wide class of objective functions that interpolate between \(\ell_2\) and \(\ell_{\infty}\) norms.

Using this framework, we obtain algorithms for computing \(1 + 1/\textrm{poly}(n)\)-approximate p-norm minimizing flows on unit weighted graphs in about \(2^{p^{3/2}} m^{1+1/{\sqrt{p}}}\) time when \(p > 2\). For \(p = \sqrt{\log n} \) this is an almost linear time algorithm. Using this algorithm as an oracle inside multiplicative weights update gives: (1) a new approach for computing approximate maximum flows on undirected graphs that does not use oblivious routings; (2) the first almost-linear time high-accuracy algorithms for $p$-norm semi-supervised learning on graphs when \(p < 2\); and (3) the first almost-linear time algorithm for approximate total variation minimization.

* We show existence and efficient algorithms for constructing graphical spectral sketches -- a distribution over sparse graphs H such that for a fixed vector \(x\), we have w.h.p. \(x'L_Hx=(1\pm\epsilon)x'L_Gx\) and \(x'L_H^+x=(1\pm\epsilon)x'L_G^+x\). This implies the existence of resistance-sparsifiers with about \(n\epsilon^{-1}\) edges that preserve the effective resistances between every pair of vertices up to \((1\pm\epsilon).\)

* By combining short cycle decompositions with known tools in graph sparsification, we show the existence of nearly-linear sized degree-preserving spectral sparsifiers, as well as significantly sparser approximations of directed graphs. The latter is critical to recent breakthroughs on faster algorithms for solving linear systems in directed Laplacians.

Improved algorithms for constructing short cycle decompositions will lead to improvements for each of the above results.

We show how to perform sparse approximate Gaussian elimination for Laplacian matrices. We present a simple, nearly linear time algorithm that approximates a Laplacian by a matrix with a sparse Cholesky factorization, the version of Gaussian elimination for symmetric matrices. This is the first nearly linear time solver for Laplacian systems that is based purely on random sampling, and does not use any graph theoretic constructions such as low-stretch trees, sparsifiers, or expanders. The crux of our analysis is a novel concentration bound for matrix martingales where the differences are sums of conditionally independent variables.

Faster Algorithms via Approximation Theory illustrates how classical and modern techniques from approximation theory play a crucial role in obtaining results that are relevant to the emerging theory of fast algorithms. The key lies in the fact that such results imply faster ways to approximate primitives such as \(A^s v, A^{-1}v, \exp(-A)v\), eigenvalues and eigenvectors, which are fundamental to many spectral algorithms.
The first half of the book is devoted to the ideas and results from approximation theory that are central, elegant, and may have wider applicability in theoretical computer science. These include not only techniques relating to polynomial approximations but also those relating to approximations by rational functions and beyond. The remaining half illustrates a variety of ways that these results can be used to design fast algorithms.
Faster Algorithms via Approximation Theory is self-contained and should be of interest to researchers and students in theoretical computer science, numerical linear algebra, and related areas.

We present a new algorithm for Independent Component Analysis (ICA) which has provable performance guarantees. In particular, suppose we are given samples of the form y = Ax + \(\eta\) where A is an unknown n X n matrix and x is chosen uniformly at random from \(\{+1, -1\}^n\), \(\eta\) is an n-dimensional Gaussian random variable with unknown covariance \(\Sigma\): We give an algorithm that provable recovers A and \(\Sigma\) up to an additive \(\epsilon\) whose running time and sample complexity are polynomial in n and \(1 / \epsilon\). To accomplish this, we introduce a novel "quasi-whitening" step that may be useful in other contexts in which the covariance of Gaussian noise is not known in advance. We also give a general framework for finding all local optima of a function (given an oracle for approximately finding just one) and this is a crucial step in our algorithm, one that has been overlooked in previous attempts, and allows us to control the accumulation of error when we find the columns of A one by one via local search.

We give a novel spectral approximation algorithm for the balanced separator problem that, given a graph G, a constant balance b \(\in (0,\frac{1}{2}],\) and a parameter \(\gamma,\) either finds an \(\Omega(b)\)-balanced cut of conductance \(O(\sqrt{\gamma})\) in G, or outputs a certificate that all b-balanced cuts in G have conductance at least \(\gamma,\) and runs in time \(\tilde{O}(m).\) This settles the question of designing asymptotically optimal spectral algorithms for balanced separator. Our algorithm relies on a variant of the heat kernel random walk and requires, as a subroutine, an algorithm to compute exp(-L)v where L is the Laplacian of a graph related to G and v is a vector. Algorithms for computing the matrix-exponential-vector product efficiently comprise our next set of results. Our main result here is a new algorithm which computes a good approximation to exp(-A)v for a class of symmetric positive semidefinite (PSD) matrices A and a given vector v, in time roughly \(\tilde{O}(m_A),\) where \(m_A\) is the number of non-zero entries of A. This uses, in a non-trivial way, the breakthrough result of Spielman and Teng on inverting symmetric and diagonally-dominant matrices in \(\tilde{O}(m_A)\) time. Finally, we prove that \(e^{-x}\) can be uniformly approximated up to a small additive error, in a non-negative interval [a,b] with a polynomial of degree roughly \(\sqrt{b-a}.\) While this result is of independent interest in approximation theory, we show that, via the Lanczos method from numerical analysis, it yields a simple algorithm to compute exp(-A)v for symmetric PSD matrices that runs in time roughly \(O(t_A\cdot \sqrt{\|A\|}),\) where \(t_A\) is time required for the computation of the vector Aw for given vector w. As an application, we obtain a simple and practical algorithm, with output conductance \(O(\sqrt{\gamma}),\) for balanced separator that runs in time \(\tilde{O}(\frac{m}{\sqrt{\gamma}}).\) This latter algorithm matches the running time, but improves on the approximation guarantee of the Evolving-Sets-based algorithm by Andersen and Peres for balanced separator.